I was off again! But, instead of work, this time it would be as a tourist – I was going on holiday! This time round I was headed in a different direction, South West, towards Peru. I had been enthralled with the country ever since I can remember: amazing constructions, fascinating beliefs, bright colours, alpacas and human sacrifice.

For this trip I had a travel buddy whom I’d met during my first visit to Sri Lanka back in September 2015. A guy named Andy had shared my room at the hostel and we had bonded over a mutual dislike of Christmas and a love of food. Our plan was to fly out on the 20th of December, in order to avoid Christmas, and visit some of the classic historical sites such as Machu Picchu, Cusco, Lima and the Nazca desert. We were travelling on different flights but, as our planes were due to land within minutes of each other at Cusco airport, our plan was to meet up there.

I had two change-overs, Madrid and Lima. The first went without a hitch, but I had been warned at Heathrow that, despite my paperwork saying my luggage would fly straight through to Cusco, I may need to check it out and in again at Lima. Lima was absolute chaos! Finding my luggage was simple enough, but I was faced with 100s of people all queueing in one long vague line to get through security checks, this could easily take hours and I only had one before my last flight was due to take off. A seemingly random woman in no discernible uniform appeared, and grabbed me and two other people with backpacks and dragged us through the mass of people towards the front of the airport. A small counter stood alone in a corner with a queue of just 6 people; apparently if your luggage wasn’t on a trolley, you could jump the queue ahead of everyone else: result! I weaved my way through the rest of the airport with ease – more or less! An odd detour out of the building added a bit of confusion, but I finally got to the departure gates.

Upon my arrival a PA system informed me that there would be no announcements regarding flight information or departure gates because, clearly, that’s not what airports are there for. After a bit of ingenious guesswork I was eventually on my last plane. I was shattered as I’d been travelling for 17 hours (I don’t usually sleep on planes) and was still feeling very rough from a lingering sinus infection. Almost as soon as I sat down I feel asleep. I woke up about 45 minutes later expecting to be close to landing at Cusco, but found that we were still firmly on the ground. My watch was still set to UK time so I hadn’t a clue what the time was or how late I was going to be. The plane ended up spending longer sitting on the runway than the actual length of the flight, no reasons or apologies were given by the crew and when we landed no local time was given. I think they were hoping we wouldn’t realise just how late we were! However, the valley we flew through, before touching down, was awe inspiring and for the last few minutes of the flight I completely forgot my worrying  and just stared in wonder. The following pictures don’t even capture a fraction of the beauty.

I crawled off the plane in a fashion somewhat reminiscent of a legless zombie and dragged myself to the luggage belt. Within a few seconds a relieved-looking Andy appeared, he’d been waiting over an hour for me unable to go anywhere and flop as I had all our booking details for the hostel. Bags retrieved, taxi caught and beds flopped into, we weren’t going anywhere for a while.

When we eventually woke we had Cusco to explore and dinner to find. The city was beautiful with some stunningly intricate architecture. We wandered through many plazas of varying sizes and they all had some form of statue or water fountain surrounded by plants. There were some Christmas decorations but they were understated and just added to the atmosphere. After deciding to climb a long, rough-hewn set of steps for a great view of the centre of the city, I was left feeling as fit as the Stay Puft Marshmallow man in Ghostbusters – the altitude definitely made things a bit tougher. Eventually, my stomach took control and demanded we find food, so we ended the night with alpaca steaks and beef heart, it was delicious! 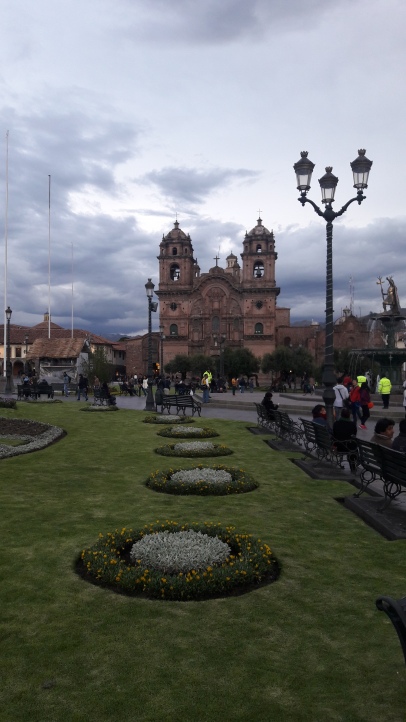