I was staying in a private reserve known as Wild Rivers which covered 2600 hectares, so it wasn’t massive but we were able to drive around it at any time of the day or night. ‘What animals would you like to see while you’re here?’ I was asked. I hadn’t really wanted to say as I’m not massively interested in the usual animals (giraffe, elephants, kudu etc) and those which I am tend to be nocturnal, elusive and scarce. I didn’t have expectations of seeing many, if any, of the animals on the top of my ‘Fi’s unrealistic list!’, as it began with the following:

As you can see, the species I most wanted to see were definitely the more difficult to find animals. The all hours’ access to the reserve, theoretically, meant there was a slightly greater chance of seeing a few of the more common species such as the genet and hyena however, work comes first and with a lot of 4/5am starts night drives were out of the question. Most days, if we were back from surveying in time, we’d head to one of the ‘sundowner’ spots which gave beautiful views of the area as the sun set around 6pm. On the short drive back to the house, as it darkened, we’d keep an eye out for animals but usually only came across impala and giraffe as it was really a bit too early for the night creepers, or so I thought. Imagine my monumental shock and delight when driving back one evening, while it was still light, and there at the side of the road, bold as brass was a ruddy great AARDVARK!!!!

It took off at the sudden appearance of the 4×4, we immediately slammed on our brakes and reversed slowly to get a better look. He slowed to a plod very quickly and seemed calm so we made the decision to follow him at a distance. It was incredibly surreal and I couldn’t stop grinning as we snuck behind it. It had such a big adorable butt, a slightly comical gait, big flappy ears and an amazing hooter, what an animal! Luckily John had a camera on him and managed to get this amazing shot. 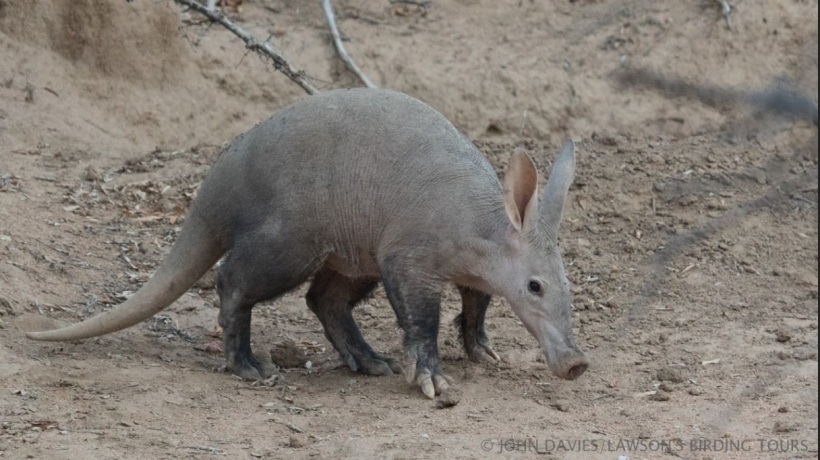 Aardvarks, also known as ‘earth pigs’ in Afrikaans, are largely insectivorous and feed mainly on termites. Termite mounds are massive solid structures which the aardvark tears apart with spoon shaped claws on the end of powerful limbs. Due to the depths of termite mounds they have a tongue which can extend to 30 cm, hence the need for such a big snout which, by the way, can close the nostrils to stop dust or insects getting in, and why bother chewing your food when your stomach can grind it all up for you? What is not to love about such an alien creature!