After 2 months of opening and closing the traps, catching water monitors and waging war against bait stealing rats we finally caught a fishing cat! Once again it was a male. There must be females out there somewhere, but the camera traps at each site had only been picking up males and all the project’s previous collared cats were also male. I worked for a number of years in a UK zoo which held one of the largest collections of fishing cats in the world, so I know from experience – in a captive setting at least – that the males tend to be bolder and far greedier, so maybe it’s a sex difference – after all, the females do have to protect and raise the young; maybe caution increases survivorship.

I am now sure the cat had been playing with us, as the evening we caught him the trap had meant to be shut due to May Day (yes, once again everything closes) but we had forgotten. Oh well, it was mission accomplished. We whizzed him down to the Wildlife Department and got him settled in a holding area; we would return later with the vet to sedate him. He was a relatively calm cat and appeared to be quite small and slender, weighing only 11kg (males can get up to 16kg). Once he was sedated, a whole range of measurements had to be recorded, including full body length, leg length, canine length and head width – to name but a few. We checked him over looking for any parasites or injuries; he was in good shape, just two notches on one ear and a chipped canine. 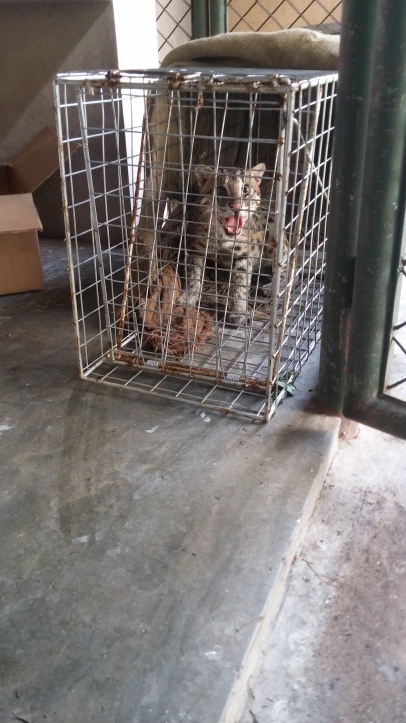 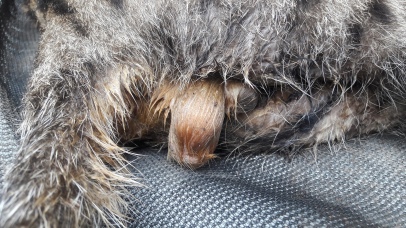 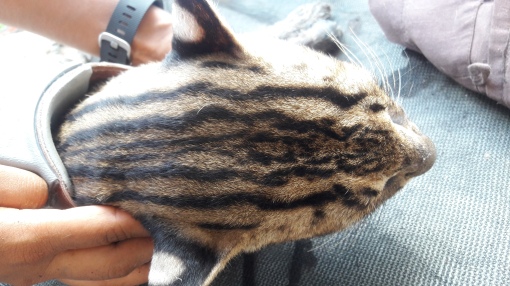 We then painted his paws with non-toxic water colour paint so that we could take paw prints on card and made impressions in clay, nothing scientific here just for our own interest and to help clarify pugmarks in the field. The collar was attached and activated and a heap of photos were taken of his markings from all angles. Fishing cat markings are just like finger prints, they’re unique to every cat and this boy had 2 distinct lines, a zigzag on his right thigh and a flattened heart shape on his left shoulder. With all our data collected there was nothing else left to do but leave him be, and let him recover in the trap cage for release later that evening. We would release him back at the study site where he’d been caught and wait for the GPS data to beep in. We would wait with baited breath. 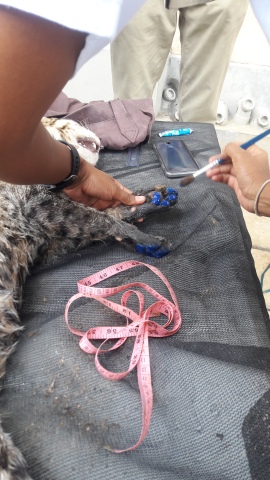 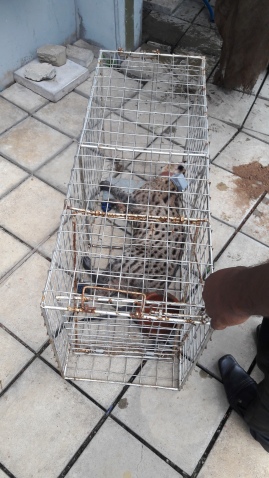