During my school days I used to love public holidays, an extra day off to do nothing was fantastic, but as an adult they’re just a pain in the arse. Sri Lanka is a country with 3 main religions (Buddhism, Hinduism and Christianity) and it’s infuriating just how many holidays there are, and they’re definitely not conducive to work. In a space of approximately 6 weeks there have been two Poya (full moon) days, Good Friday, Sinhala and Tamil New Year, a random public holiday day and now May Day. During many of these the country practically shuts down – usually for a good few days longer than the holiday actually lasts! For example, the New Year sees people returning to their family homes, which means that rather than just being away for New Year’s Eve and New Year’s Day, they are away for well over a week. Literally everywhere is closed, including the Government departments, and without the Wildlife Department personnel being available, neither Anya nor I are allowed to touch a fishing cat which meant we had to close our trap cages, open them, and close them, again and again. This is not particularly helpful when trying to catch any animal, especially this cat, as our cameras had been recording individual returning to a site roughly every 8 days, and –frustratingly– this always seemed to coincide with the holidays when the cages had to be shut. I could’ve sworn he was doing it deliberately.

Whenever possible we tried to set our traps daily, always in the evening, as that is when our cat was active and we returned each morning to close them again. Early one morning, as we galloped down the path to see if Humphrey and Sampath had worked their chickeny magic, we saw that our first trap was closed and could hear Humphrey clucking his disapproval. Excitedly, we both crept closer to catch a glimpse of the trap, was it our elusive fishing cat? Unfortunately not, it was a very hissy, unimpressed water monitor. Still, it was 1 – 0 to team Humphrey. After releasing the lizard and watching him bomb straight into the water, we headed to our second cage and saw that it too was closed. As we neared the cage we again saw a long reptilian tail and were met with an angry water monitor. After holding the trap open for a few minutes, during which time the lizard didn’t seem to grasp the concept of turning around to exit the cage, he instead decided to back out while whipping his tail around like a lasso and, unfortunately, Anya’s ankle took the brunt of his displeasure. Although they weren’t the species we’d hoped for, the scoring had begun and it was ‘one–all’ in chicken wars. 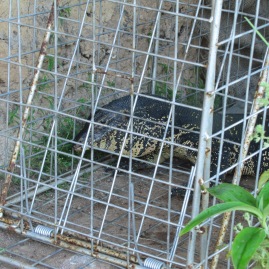 For the next few weeks each time we checked our cages we always found one or both of them shut but nothing held within. After checking our camera traps it turned out there were three rats, all of different species, triggering the traps, stealing the bait and easily wriggling out through the mesh. In addition to the chickens we had decided to bait the trap with meat, as we weren’t sure this particular cat was used to catching poultry. We tied the meat to the roof with a piece of wire so that it hung above the trigger mechanism, because with the traps we are using there was no room to hang the food further back. Initially the rats were chewing the meat so that it dropped from the wire directly onto the pressure plate. So to avoid the trap shutting we added a small hammock to catch any meat that dropped. ‘That’ll stop them’ – or so we thought. The rats took to standing squarely on the plate and triggering the door – just to spite us.

We endured this rat thievery for weeks and eventually decided to set another trap at a small site nearby. You may recall we trapped a cat there late last year due to a cage malfunction and, as a Wildlife Department vet had been unavailable, we had to let him go without collaring him. Since then a lot of forest clearance and house building has occurred and the cat vanished from our cameras. However, one observant local had come across him recently and, as he (the cat not the local) was a known poultry thief, we decided to relocate Sampath. Within a week we had this cat on camera climbing on the cage. Annoyingly, part of the trigger mechanism of this trap is on the outside and the cat managed to spring the trap whilst climbing over the mesh. Sigh. We just couldn’t catch a break.

One Sunday morning we turned up to our main site a tad later than usual and found Humphrey’s cage overturned, the roof had been opened and there was no sign of him anywhere. Upon closer inspection we deduced that he’d not been attacked and eaten by an animal, as there was no blood or feathers; the cage was undamaged and the wires that attached his cage to the trap weren’t broken and could only be untwisted by opposable thumbs. The camera facing the cage and the one on the path both automatically shut off early in the morning and so, frustratingly, the only photo of the culprit we managed to get was from a camera angled away from the cage which only showed a portion of his shoulder. It was lucky we’d moved Sampath to the other site as her original trap cage had also been interfered with. When we returned later that day to reset and bait the traps, the site security guards told us they had found Humphrey, he was dead. The only sign of damage to his little body was a small puncture wound on the inside of his thigh, whether he’d startled a snake, got bitten, ran away and then died of shock we’ll never know but it was with a heavy heart we said goodbye to Humphrey the Magnificent. He was a very feisty bird with heaps of personality, and due to the interference of someone who shouldn’t even have been in the vicinity he was now dead: what a sad waste of life.

Greater love hath no researcher than for her bait chicken 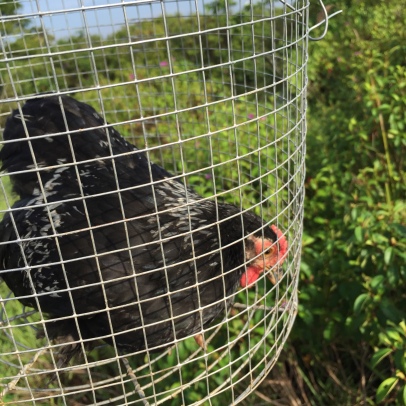 Greater love hath no researcher than for her bait chicken.