Jeez this place was stunning and SO fancy, I felt like I clearly didn’t belong here. You could see straight through the vast hotel lobby to a decking area with a pool which was over-looking a deserted beach framed by palm trees. The sea was crystal clear and the sun was blazing in the bright blue sky, it was like a picture from one of those pretentious and expensive get-away magazines. I was in Galle, an hour or so south from Colombo and I was in search of exotic sea creatures. 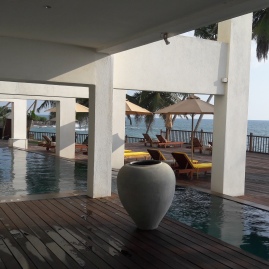 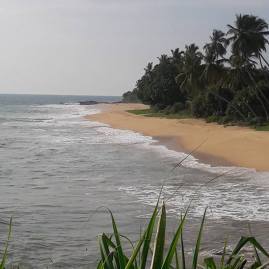 The coast of England isn’t particularly conducive to snorkelling. No matter how interested you are in fish it’s unlikely you’ll want to swim along slowly, even in the height of what little summer we have, as you’ll quickly get very cold. Sri Lanka, however, is another matter. Unfortunately, I’d been unable to snorkel at any of the beaches near me during my last visit as the sea had been too rough due to the rains. But now it was the ‘desiccate you to within an inch of your life’ season so, theoretically, things should be calmer. Whenever I think of warm tropical seas I always have this (somewhat naïve) preconception of peaceful waves lapping over golden island beaches – images that were planted there in my brain by numerous television programmes I had watched whilst growing up. Now I must admit that I am always taken aback by just how rough the seas around the island can be.

After receiving a complimentary glass of papaya juice we were shown to our rooms. I say rooms though they were really like mini-apartments. Oddly, there was a gravel-covered section of flooring like a type of mini-garden directly in front of our room doors. Inside, as I’d come to expect from this country, there were a million light switches, unmarked and in no discernible order, I think I hit every one before I found the light I wanted. I also managed to turn off the air conditioning – much to Anya’s horror later on. The bathroom had the most enormous shower I’d ever seen; you could almost fit an entire rugby team in there! There was an upstairs!!! We had a balcony with an amazing view, a minibar and we seemed to be the only guests! It was luxury, but we weren’t here to stay inside so we changed, grabbed our snorkelling things and raced to join Sasha and Binu on the beach. Oh, I should’ve mentioned, two lovely friends of Anya’s were joining us and Sasha was the genius behind the booking. 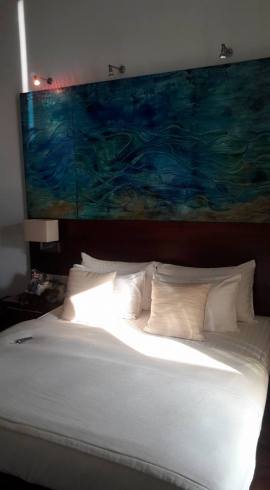 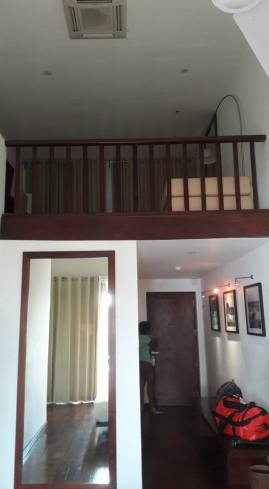 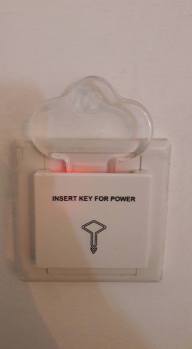 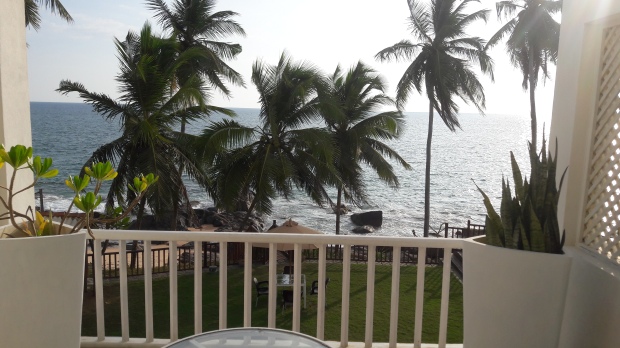 Unfortunately, the sea was far too rough to enter past our knees and even then the waves would batter us backwards; but, on the upside there was a long stretch of rocks which meant rock-pooling for Anya and I and lazing in mini-Jacuzzi-like pools for Binu and Sasha. We came across 2 species of small fish, heaps of black crabs, mudskippers and angry-looking sea urchins. It may not have been snorkelling but it was exciting none-the-less. At the end of the beach was a large pile of boulders and as the sun began to set, we all decided to scramble to the top. Some of us bounded up like mountain goats while others scrambled up like cats with two broken legs. The view was stunning: so many shades of pink, orange and red in the sky with a fierce sea crashing against the rocks below. Annoyingly, not one of us had thought to bring a camera and with the sun descending rapidly we didn’t have the time to run back to our rooms to get one, so we settled atop the highest rock and just watched the sky blaze.

For a half board booking I was amazed at the fantastic amount of food provided at the evening meal. Normally you’d be offered a limited choice of dishes but not only could we choose from the entire menu but we got to pick 4 courses!!!! The food was really nice, not fabulous but there was a lot of it which seemed an allowable compromise.

I must take a moment here, before I continue my narrative, to let you know of my gargantuan love of potatoes. Perhaps if I were of Irish descent, or even if my mother had chowed down on sacks of potatoes while pregnant it could be understandable but neither of these is true, so I can’t really explain it. But I love potatoes. Anyway, back to the dinner.

After being pleased with the size and flavour of the first 2 courses it was now time for the main course. Although I’m always up for eating local cuisine I’d seen on the menu that one of the dishes came with dauphinoise potatoes! This is my all-time favourite potato dish. There are no words to describe just how deliciously magic I find them, well, maybe the phrase ‘unicorn steak’ would come close. Anyhow, I was practically bouncing in my seat like a toddler, much to the confused amusement of the others, when the server came out of the kitchen and placed the plate before me. Slightly manically, I flipped the meat off the hidden potatoes and immediately felt like dropping to the ground in dramatic fashion and screaming a long “Nooooooooooo!” towards the sky (think 80’s action movie). I’d been presented with an anaemic-looking mash, that even the most sun-addled brain could see that this was not dauphinoise potatoes. I’m not going to lie, I sulked a little, and my mood wasn’t helped by the weird avocado ice cream that infected my plate for dessert.

After a night sleeping in the Arctic (Anya sets the air-con to ridiculous temperatures) we were up bright and early at 6am to do some yoga. I’m not flexible, or stretchy or bendy in any way shape or form, in-fact I’m sure I’m part tree, so I have no idea why I agreed to take part. As it turned out the fancy tech in our upstairs of the room didn’t like Anya’s USB stick, so I escaped the humiliation of attempting to contort myself into unnatural shapes. We wandered onto our balcony to find that the sun was already well up in the sky – the sunrise must’ve been at some inhuman hour, but it wasn’t too hot yet. Binu and Sasha were also up and standing on their adjacent balcony; we all agreed to change quickly and run down to the beach to see if the sea was any calmer. Alas! It was not, but at least this time I’d thought to bring my camera so I snapped away while the others made a plan for the day. We wandered up to the hotel for breakfast and it was massive. About 5 courses were laid before us including a large fruit platter each, porridge, yoghurt, cereal, cooked American breakfast, bread rolls and butter, pancakes with various sauces, fruit juice and tea and coffee. I was going to sink in the sea later! 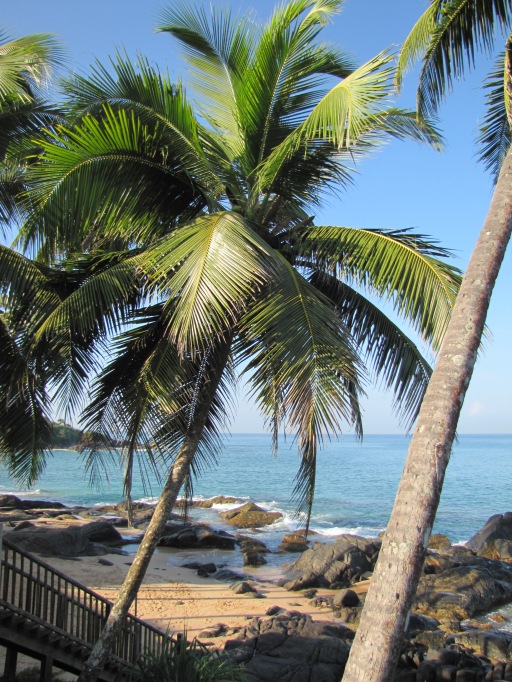 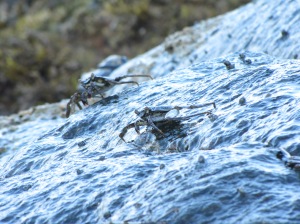 After bundling into the car we travelled a little further down the coast to the town of Hikkaduwa which is known for its reef diving spots. While the others stayed on the beach relaxing under some trees, Anya and I charged into the sea with masks, snorkels, flippers and a GoPro (mini- video camera). Although we were in a small bay the water was still quite rough, and badly affected the visibility which made it seem as if we were looking through a sand storm. For almost 15 minutes we didn’t see a thing and then in the murky distance, feeding off the sea bed, was an olive ridley turtle. It was wonderful, but I didn’t want to get too close for fear of disturbing it. In recent years, tourists swimming alongside turtles for extensive periods of time have started to become a major concern due to the great deal of stress it can cause the animal, and I knew better than to do that. After a few minutes with the turtle we battled the current to swim further to the edge of the bay and nearer a shallow reef. I know it’s the Indian Ocean but the temperature was ridiculous, it was like very warm bath water and certain patches we swam through, just above the reef, were uncomfortably hot! I never thought I’d long to swim in the seas surrounding England again! The current was strong and at points I anchored my hands into the sand to avoid getting swept into the reef and destroying anything. We’d finally found some fish and although there weren’t many (individuals or species) it was still incredible to be there.

I was so intent watching the fish that I didn’t notice the massive turtle until she swam straight into my side. I hadn’t been moving for the last few minutes so for once I could attribute this collision to her clumsiness and not my own. She didn’t seem in the least bit fussed by me, slightly inconvenienced perhaps, but not bothered. Apparently the turtles we saw, while attempting to not boil or be whisked away by the current, were habituated resident turtles which weren’t stressed by the constant human presence. I have no idea how long we were watching fish or bumping into turtles, but our growling stomachs told us it was time to get out and find some food. Even after that monstrous-sized breakfast I was starving! 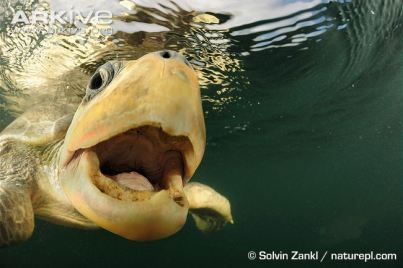