The final part of my epic birthday celebrations were in the hands of Anya’s fabulous Mum, Mihiri. Although a group of us had been out for a joint birthday meal before she left, Anya still felt guilty about being in Nepal during my birthday, so she’d badgered her Mum into organising something. I was nervous. I had no idea what was happening or where we were going – I don’t do well with surprises. All I knew was that I was being picked up at 4:30am.

Once again I was up and out while it was still dark. Well, I say out, I was actually stuck in the hostel grounds. The entire place is surrounded by a high wall and the 9ft gate is locked at night with a guard on duty. However, the guard was nowhere to be seen. Every now and again throughout the night he patrolled the perimeter: he had to be around here somewhere. But then I remembered that the guys who ran the hostel had left for Dubai a few days earlier, and I was the only guest staying. Maybe there wasn’t anyone on duty? Maybe the cook who arrived about 6:30am had the key? I wandered around for about 10 minutes, the place wasn’t that big to patrol, but I came across no one. I went to the gate to peep through a hole to check if Mihiri had arrived. As I glanced down I noticed that the padlock, although looped through, wasn’t actually locked – I could get out. YAY!

Once outside it was just a matter of waiting but within a few minutes the car arrived and the mystery adventure had begun. I was informed that we’d be driving to Koslanda (wherever the heck that was) to stay at a friend’s tomato plantation. I know, I was just as confused as you are. As far as I was aware the only plantations in Sri Lanka were tea and rubber. Koslanda was about a 6-hour drive up into the hill country. I was already shattered with the week’s travelling and numerous stupidly early starts, but I didn’t want to miss any of the views or be rude by sleeping through the entire journey. As it turned out the glove compartment had got stuck in the 90s, and to my delight the CDs it held consisted of Rob Thomas (from Matchbox 20, obviously), Simply Red and Nirvana. My singing would ensure we both stayed wide awake!

As I’d previously either snoozed or chatted my way through the highway journeys, I hadn’t noticed how people drove when given lots of room and little traffic. You may recall from earlier posts where I had described the local driving in Sri Lanka as crammed, making no sense, that indicators are clearly not understood and horns are over-used to the point of them almost being recognised as the country’s fourth official language. In contrast the highway was a million times quieter, I never saw it busy. However, this did not mean that it was safe to drive down, OH NO! Even without traffic the concept of lanes had clearly not been grasped, it was either that or it had something to do with the Sri Lankan incredibly laid-back attitude to life. The number of times cars we were following began to drift into the other lanes was incredible. You’d beep the horn and, as if they’d been jolted awake, they’d yank their steering wheel over so that they were once again back in their correct lane.

After having to wake up a good few drivers with the horn, we finally left the highway and wound our way up into the hills. The scenery, in keeping with the theme running throughout this country, was just stunning! The thin, winding country roads gave us some spectacular views but it was difficult to see wildlife, as the hillside dropped away steeply on one side and rose just as steeply on the other. As we zoomed up and up I was lucky enough to spot a large tree squirrel, it was a fuzzy monster!

Finally, we made it to the tomato plantation and were greeted by Mihiri’s friend, Rajah. His house was a traditional Planter’s home (a planter being the owner of a tea plantation) and obviously, very colonial looking. It was surrounded by a massive garden and an electric fence to keep any roaming elephants out. Once inside we headed straight for bed to grab a quick 30-minute nap, and then it was time for elevenses (who says it should be restricted to hobbits?). Directly opposite the window in the dining room, there was a large tree on which a yellow-fronted barbet had decided to start excavating its nest. Unlike a woodpecker, that will smash his beak against the trunk of the tree at a zillion miles an hour, from what I could make out, this bird seemed to just be tearing chunks of bark off with its beak. It was fascinating to watch. He’d picked a great spot for a home, a few metres away from a bird table; this was my kind of bird, building his house right next to a buffet. As I gobbled up something of everything on the table (the dinner table not the bird table) we made a vague plan for the day, well I didn’t really, I just nodded and said anything would be fine. I was just happy to be there.

The day officially began with us hopping back into the car and driving through yet more stunning scenery, until we came to the highest waterfall in Sri Lanka, Bambarakanda. 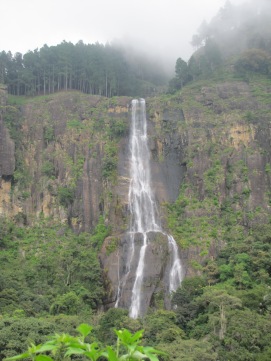 At 790 foot high it was almost 5 times taller than Niagra. In true Lanka health and safety style, there were vehicles parked all over the bends spanning a twisty section of the road that gave the best view. The 241 metres (yes metric measurements so everyone understands) of tumbling water was awesome.

As the clouds descended upon the hillside and began to obscure our view, it was time to move off and head for an old Benedictine monastery called Adisham. No, I hadn’t been some massively evil, crazy drug warlord (drug warlady just sounds odd, no offense to sex equality) in need of confession before I started another year of my life or anything like that, apparently it just had some nice gardens. The grounds of Adisham seemed to have a lot of plaques with random quotes on, they seemed to be a slight twist on traditional sayings. It was a very pretty little place but it didn’t take long to view everything and, under a sudden downpour of rain, we headed back to the car after only some 40-ish minutes.

Next, we drove to the middle of a tea plantation, halfway up a hill to eat a packed curry (like a packed lunch but not at lunch time) and admire the view. As per usual, my typical luck rolled around in the form of some low clouds which proceeded to obscure the entire landscape. At times I could barely see 6 feet downhill. Although the others were quite disappointed by this, it just reminded me of classic horror movies and I liked it, especially as the tea bushes seemed to be planted in an almost labyrinthine order: what could be lurking in there? Despite there being barely any breeze the clouds seemed to move quickly; clumps of trees would eerily appear in the distance and disappear just as quickly. I could’ve watched the misty show for hours but the food was all eaten, and there was just enough time for the last trip of the day, we were visiting the longest tea factory in the world!!!! 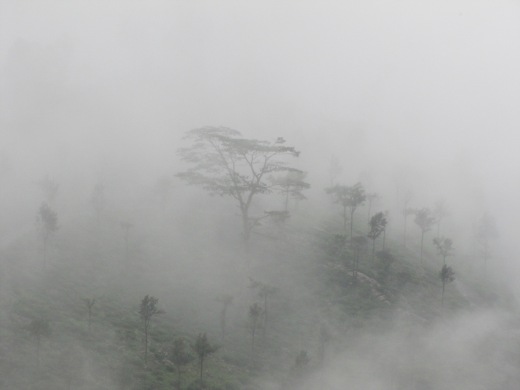 TEA!!!! I love tea and I was as excited as a sugar-dosed child in a toy shop. I would actually get to see how tea is processed! It sounds like a boring concept to most people, but then I am a crazy tea lover. We came across the first sign for the Dambateene tea factory and I let out an excited squeal, as in the bottom right-hand corner of the sign was a little symbol I recognised, a frog. The Rainforest Alliance frog to be exact and their tag line is ‘Follow the frog!’ and I had! It seems ridiculous that I should get so excited over this, but it was just incredibly surreal. Within a few minutes we had stopped in front of the factory; I bounced inside and the smell was amazing. We were given a whistle-stop tour through the factory and learnt how long tea leaves were dried for, how long they were rolled, how many times they were chopped and how they were sorted; it was fascinating. Unfortunately, I wasn’t allowed to take pictures so you’ll just have to imagine me skipping around large pieces of machinery, resisting the urge to jump in to the drying tea and make a tea angel.

It had been a long day and it was time we headed back to the plantation but, as a special treat, seeing as the tea factory had not offered us a cup of tea, we stopped by Bandarawela Hotel, an old Planter’s club, which (traditionally) was pretty much a gentleman’s club for plantation owners. After all, the British do like to make themselves feel at home. I cannot express just how AMAZING that pot of tea was! Before he switched to growing tomatoes, Rajah had been a tea planter, and so after asking how I liked my tea (black and no sugar) he knew what to tell the tea makers (what is the proper word? Waiters? Brewers? Ah – you know what I mean) and instructed them how long to brew the leaves for and at what temperature. BEST TEA EVER! I was a very happy bunny. 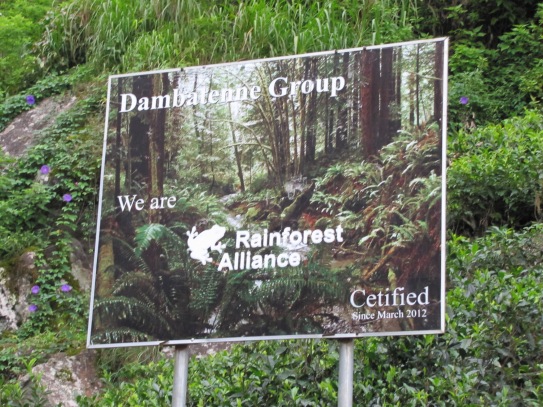 By the time we got back to the house it was dark and, being the nosey animal seeker that I am, I immediately grabbed a torch and ran back outside to see what creatures I could find in the garden. The crickets were practically deafening so it didn’t take too long to find one of those. While I was wandering along the edge of the lawn beside some bushes, at the edge of the light beam, something the size of my hand zoomed across and over a large fallen log. What the hell was it? In the darkness I couldn’t say what it had been but the way 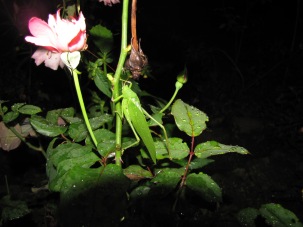 it moved suggested that it could’ve been a spider. I’ll admit I’m not the biggest fan of spiders, especially not mutant gigantor ones, but I approached the log and shone my torch over it at every angle possible. I found nothing and I wasn’t daft enough to half-clamber into a hedge to stick my face to the ground and into a log. It would have to remain a mystery. I continued on and grabbed a stick so that I could safely flip over stones and poke around. As I started turning over some woodchip a few leeches began to appear. I’d given enough blood to this country a few days previously so I hastily retreated. I did, however, find a massive bright green grasshopper thingy, the odd weevil and some ants but nothing overly exciting. I headed back into the house and was greeted with another birthday surprise.

The entire courtyard was decorated with candles and lanterns, and there was a chocolate cake which seemed to have some kind of fantastic rocket candle-thingy in it. I was a tad overwhelmed, I’d never had a surprise anything before and I love fire and cake. Completely unexpectedly I was also given 2 presents: a cup decorated with my beloved tuk-tuks and a cushion in the shape of one. It was my best birthday ever but it wasn’t quite over yet! 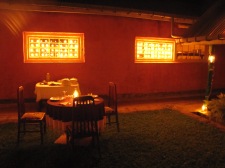