My Facebook feed is constantly filled with wildlife updates, usually small cat and vulture related (big surprise?). So some time ago, when I saw a post about a cat conference with a rusty spotted cat as the cover animal –I thought ‘Oooo small cat that’s exciting’. I didn’t look too closely, as it was bound to be in some far-flung country that I wouldn’t be able to afford to get to, so I didn’t think any more about it.

After having spent over a month working with Anya, chatting about the courses I’d taken for my degree and my Master’s –and my time working in the zoo industry– she said I should submit a proposal for a presentation dealing with enclosure design. Truthfully that terrified me. What did I know? 4 years at university, almost 4 years in a zoo and countless trips to nosey around other zoos, I didn’t think I was in the slightest bit qualified. I’ve never had much faith in my abilities and I’ve been lucky enough to work with people that know so much more than I do. So who was I to give a talk? After visiting a zoo out here and continual pestering by Anya I finally agreed to write a poster, the coward’s way out perhaps, but at least the information was there.

As it got closer to the conference, more information surfaced as to who the main speakers would be.

Incredible! The chance to hear people (whom I admired so much), speak! How was I going to keep my composure and not turn into a geeky fan-girl??

I’d been told by Andrew (remember him? the guy that runs the hostel?) that, finally, someone else would be staying at Evergreen too. I couldn’t believe it when that guest turned out to be Jim Sanderson. I was ridiculously nervous about meeting him. But when I did, he was the nicest, most interesting person and crazy passionate about the small cats. Jim acted as a cat research consultant for Anya and the other small cat researchers (Ashan – fishing cats and Chandika – rusty spotted cats). They were so lucky to have someone like that in their corner. Sri Lankan leopard lovers beware –the other species of cat in your country will be heard!

The day of the conference arrived and to say I was excited doesn’t begin to cover it. We arrived early and were each presented with our identification lanyards; I almost made one of those ridiculously high-pitched surprised rodent noises in my delight. It was so cute and professional, my first ever international conference! I read through the conference itinerary: of the 20 talks being presented, 8 focused on the leopards, 4 largely focused on the leopard with some mention of other cat species, 2 talks were on lions, 2 mentioned feline palaeontology with an emphasis on big cats, and only 4 talks were about small felids. Jeeze, Sri Lanka really was leopard-centric. 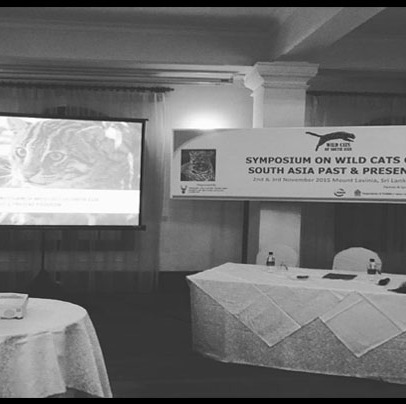 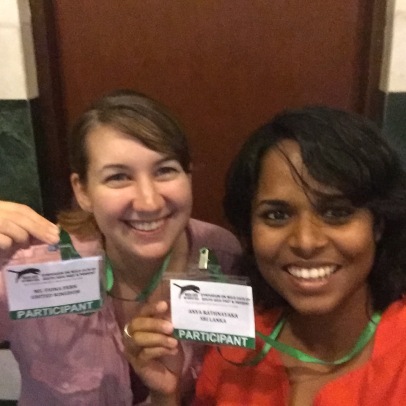 It was amazing finally seeing the people behind the names I’d used in my reference lists at university. I especially enjoyed listening to Dr Shomita Mukherjee talk about the distribution of some small felids in India and I got to speak to her afterwards. I was definitely wandering around in a science/felidy geeky colourful glow. It was incredibly weird when a few different people approached me asking to talk about my poster. To top it all off, the food served during the lunch breaks was fantastic. There were three long tables stacked up with at least 20 desserts and yes, over both days I made sure I tried pretty much everything.

Chandika, the country’s sole rusty spotted cat researcher, had managed, last minute, to secure a time slot to present his current work. His project is two-fold, firstly it is assessing the presence or absence of rusties, and secondly, it is working on enclosure improvements and an enrichment programme for a small group of cats currently held in the zoo. He asked if I would put a quick presentation together based on my poster and talk after him the next day. Reluctantly, I agreed and from 8pm till 12:45am I scoured all the photos I had on Facebook, messaged people asking if I could nab pictures they had up, downloaded everything from Dropbox, and checked my e-mail’s OneDrive. It was so frustrating, because I had all the relevant pictures on my laptop at home. Eventually I had a presentation. 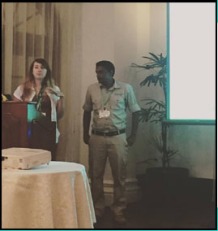 I barely slept. I kept thinking of all the ways I could make a complete prat of myself. They ranged from the normal –tripping over on the way up, to the ridiculous –somehow causing an electrical fire via the mic and setting everything, including myself, on fire. I was hoping there wouldn’t be time or Chandika would forget to call me up. Alas, no. In a poor effort to hide, I’d sat in the middle of a row, so I now had to carefully manoeuvre my way out without stumbling over, or ending up sitting on anyone. My mouth was bone dry and I was nervous as hell. I got to the podium without revealing my inner moron: so far, so good. Luckily my brain didn’t betray me and released all the facts I needed to spew out. Despite the very short time I was given to talk, it was an additional slot to the itinerary after all, people were apparently quite interested, but perhaps it was just because it wasn’t about leopards.

Last order of the day was to subtly fan-girl out. Anya and I got to talk to both professors and convinced someone else to ask if we could have a picture. Neither of us could get the grins off our faces. 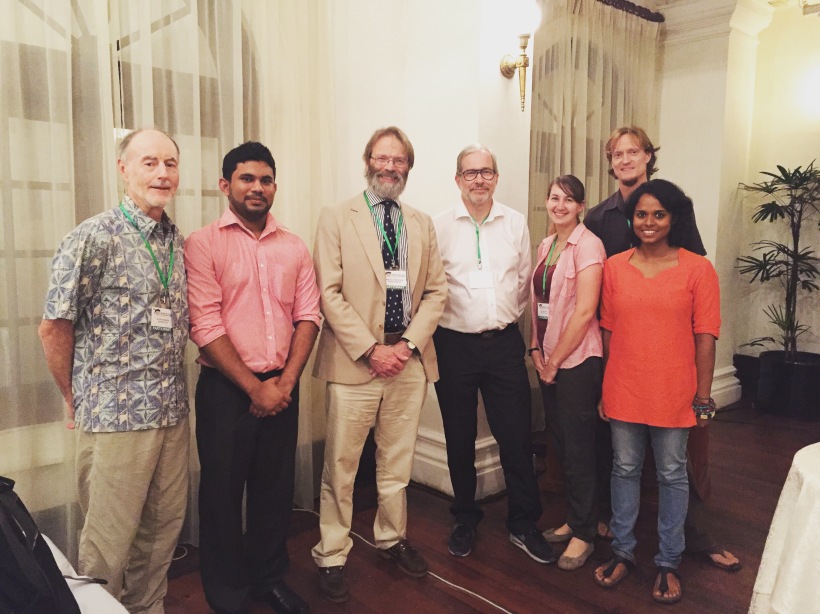 One thought on “It’s time to SCIENCE!”