One of the main things I’ve always found incredibly exciting about wildlife conservation is the collaring of animals. Firstly, it is the chance to see your study animal up close, which for many people is a rare thing, and secondly, it is a massive insight into where the sneaky gits go. I couldn’t believe my luck when Anya informed me she had another GPS collar and that we would be setting some trap cages in order to catch and collar a cat. Eeeeeeiiiiii! I had to rein in my excitement, I knew it wouldn’t be as easy as ‘here kitty, kitty!’

We’d received information about a very naughty fishing cat that had been carrying off ducks and chickens from a few houses surrounding one of our study sites. Luckily a family were willing to let us set a trap cage on their land.  A trap is essentially a weird-smelling alien contraption that unexpectedly appears in someone’s territory, and is regarded with a great deal of suspicion. With that in mind it is no surprise that animals don’t just wander into the cages. Therefore there is usually a period of time (about a week) after the trap has been set up, when it is left to become a familiar object. This gives the surrounding wildlife time to get used to the presence of the cage, time for it to lose our scent, and eventually to become part of the habitat.

Initially the trap is set open by tying the door up, this ensures that if an animal stands on the pressure plate it wont be trapped. We also set up a camera trap opposite the cage so that we can see which species are visiting.

A few days after leaving the trap I was awakened at 6am by my phone ringing. Only four people had my number, Anya and three very important people from home, so I launched out of bed like a firework in a school toilet, panicking that something was wrong. Where the hell was that ringing coming from? I started tearing my room apart looking for the stupid phone before it stopped ringing. The contents of my field bag flew

through the air, –no phone! My previous day’s clothing followed suit until finally, as Murphy’s Law decrees, the last piece of clothing I came to contained that stupid elusive block of plastic and it stopped ringing.  It had been Anya, I called straight back. It turned out the trap had somehow caught a cat. I said I’d be ready to go in 5 minutes and began tearing around the room like a blue-arsed fly. Protocol in Sri Lanka states that no wild animals can be collared without the presence of the Wildlife Department; they wouldn’t be reachable until 8 or 9am so Anya ordered me back to bed. But how could I sleep now? I was Tigger bouncy!!

Unfortunately, there wasn’t a Department vet available in the morning to administer the anaesthesia so the only thing to be done was to go and let the fellow out. Damn! After arriving at the trap site we discovered that the piece of wire we’d looped around the trap door had worn down due to all the rain. The additional pressure of the cat on the plate was too much and it had snapped –trapping the animal inside. The pressure must have been massive because this guy was a fatty. There’s no polite way to say it, he was enormous: all that gorging on easy prey had clearly taken its toll. He didn’t seem too stressed about being caught, more irritated than anything. We gave him some water, took some pictures and quickly scouted for somewhere to release him. The family told us of a large patch of forest habitat that backed on to the houses, so we took off in that direction and almost ran straight into a huge spider’s web.  Right in the centre was the largest freaking spider I’d ever seen; a golden orb weaver. We decided we’d carry the cat down a different path. 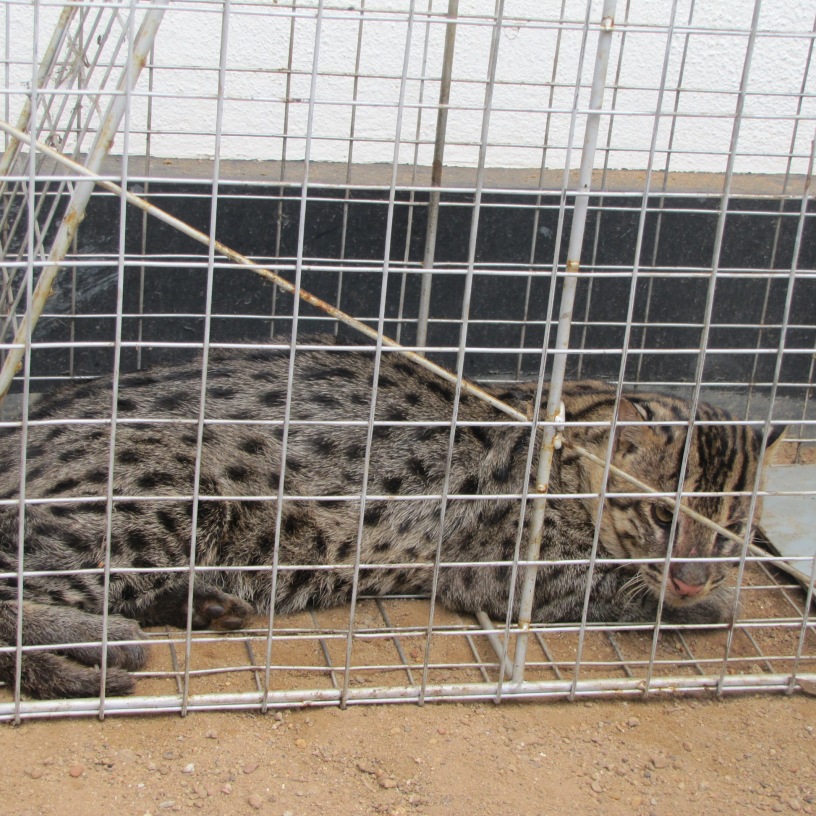 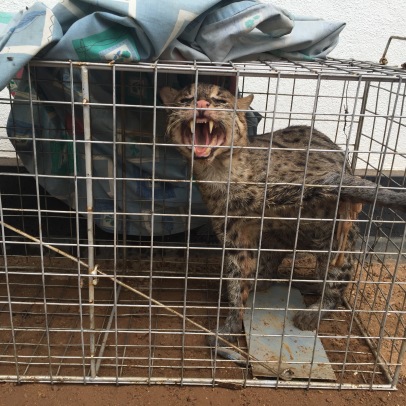 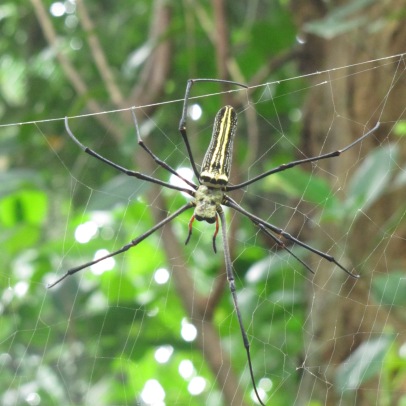 We covered the cage with a blanket to calm the cat AND to hide our hands so that they wouldn’t become potential claw targets. We all stood back as a piece of wire was looped around the cage door and it was pulled open. The cat shot out and ran straight into the forest. We would have to reset the trap and hope he was greedy enough to be caught again when everyone was ready. Till next time, fatty!