Zoooooooom! Brrrrrrrrup! Beep beep beep! Brrrrrrup! Honk honk! Oh, the constant noise surrounding this damn hostel!! It gets a tad quieter after 11pm but it starts up again just before 6am, usually initiated by the insanity-inducing bread van. Imagine a chubby little brightly coloured tuk with windows filled with bready goodness. Cute, right? Wrong! Oh, so very wrong! In Sri Lanka everyone is competing to be heard, from the constantly screaming horns of the vehicles to the walking candyfloss man who rings a bell and shouts (just like the good old days during the plague). I guess it shouldn’t have been a surprise that these adorable food-packed trucks needed to join in the din. Just like our ice cream vans at home they also have a carillon and play a tune, but, whereas our vans spread joy with their occasional music (and only then during the summer months), these maddening repurposed Pope-mobiles play a tiny excerpt of Fûr Elise over and over and over and over and over again. This is so maddening that, eventually, you’ll find yourself running down 3 flights of stairs at stupid o’clock in the morning to buy something you don’t want, in the hope that they’ll be satisfied with a sale and shut off the infernal music. I strongly believe that if I hear that tune when I get back, I will pound the closest bakery product into dust.

I still had the constant light to contend with. Even if I got up and turned off all the lights in the corridor it was still quite bright. Luckily, as one of my leaving presents, my lovely housemates had bought me an eye mask for the plane, and I resorted to using in order to get some sleep. I’m not a fan of sleeping with my eyes covered (obviously I’m not including my eye lids in that, how ridiculous do you think I am?), because how are you meant to jump up ninja-style and fight off any monsters

that appear in the middle of the night? I know, wishful thinking.  We all know I’d probably smash my head on the top bunk then tumble off the bed while trapped in my covers. As grumpy as this was making me and, as I’d mentioned in an earlier post, I just couldn’t get any peace to work and I was fed up with having the same conversation 21 days in a row, it was none of these things that put the final nail in the coffin.

I feel that I should take a moment to explain a bit about the Sri Lankan culture. Over here everyone is very laid back, if something doesn’t work correctly or is broken, then good luck getting it fixed. For example, at the beginning of my second week a window in the corridor broke so that it was permanently open. The staff knew about it, they had put a sign up. Observant –yes; helpful –no! With the hostel being sandwiched between two large roads an open window just increased the volume. Three weeks later and it was still broken. Two days before I left, the managers –wanting a good review– came up and asked how my stay was and if there was anything they could do. I mentioned the window and their response was ‘Oh, this is Sri Lanka. It takes a long time to get things fixed.’ Yet 10 minutes later they re-appeared saying that it was fixed and they’d also oiled the chronically squeaky door into the corridor, which I had forgotten to bring up. Oh, and when I say squeaky, I’m not talking about a little squeak doors acquire occasionally –I mean a frigging banshee wail! It was clear they knew about these problems, but why do today what can be put off indefinitely?

With that explained I can get to that final nail. In order to access the rooms at this hostel, everyone had an electronic fob to enter the corridor, but none of the rooms locked. Sure, they had door locks and everything, but they didn’t work, this meant that anyone on the corridor could access your room 24/7. That didn’t bother me too much. Every room had air con with its own remote and it was this that proved to be the problem. During my third week I think a few of the room remotes must have been misplaced, or maybe it was as simple as the batteries had died, meaning this required effort to fix them. The result of this was that between 9pm and 11pm we had members of staff coming in the room I was sharing, taking the remote, using it and then returning it about 10 minutes later. Several times! Not only did this get really annoying after 3 days, but when I finally had the whole room to myself for once, at midnight all the lights were flipped on and two guys waltzed into the room and took the remote from beside my bed. I have no problem being woken up in the middle of the night if it’s an emergency, but generally people know not to wake me for no good reason –I’m pure Hulk if you do. 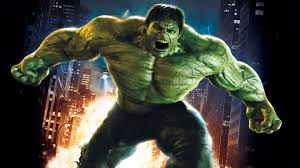 I was uncomfortable –the beds were rock solid– I wasn’t sleeping well and was getting very irritable; worse still – I had 2 more months in this place. Imagine my reaction when Andrew, a new roommate, appeared, and within 5 minutes of chatting told me he was opening a new hostel just down the road. People sometimes say ‘things happen for a reason’ or that some meetings are ‘just meant to be’. Personally I think that’s bull. I’ve never been one of those people lucky enough to be in the right place at the right time. With that in mind you’ll understand my scepticism. We exchanged e-mail addresses but I didn’t expect to hear any more. However, 16 hours later I was very surprised to receive a message full of pictures of empty buildings, and an offer to come and view the place. Hmm, could have potential!

A week later I decided to check the place out. Anya accompanied me as my insurance policy. After all, if he turned out to be a crazy murderer, people would notice I was gone much sooner if she disappeared too. The hostel was located approximately 20 minutes further down Galle Road, just near the beach. Following the instructions, we turned down a side street lined with plants, a good omen; busy streets just do not have kerbside planting –so far so good. The next thing I noticed was, although this place was only just off the main road, it was SO much quieter. I occasionally heard the odd vehicle –but that was all. Getting better! When we arrived at the place we found that, as in the photos, each of the buildings was empty but with a hive of people working away in them. Andrew assured me that with a lot of deliveries due (like furniture) there would be a room available for me within a week, and that they would be officially open within 2 weeks. I didn’t care if I’d be snoozing in my sleeping bag in a bare room –I just wanted a quiet dark room to sleep in! I accepted his offer straight away.

I gave my notice at the hostel and counted the days till I could move out. 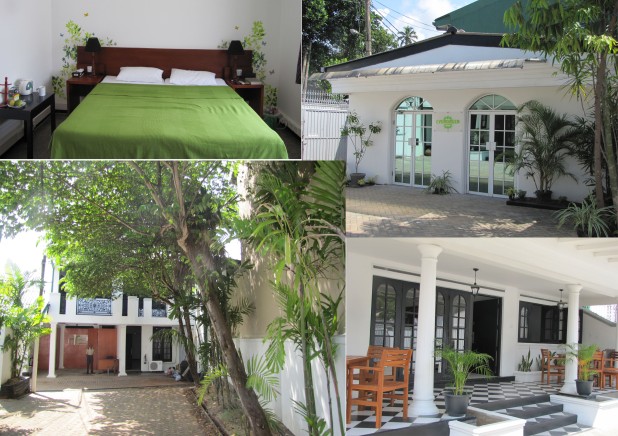 Before the hostel could open officially it was to have an evening opening ceremony with a special guest, the Minister of Tourism, Development and Christian Affairs (I know –very odd mix!). Just before 6:30 Andrew came and got me from my room, he was suited and booted. ‘Ah, crap!’ I hadn’t realised it was going to be such a fancy affair and most of my clothes were for field work; nowhere near smart enough for such an occasion. We wandered round to the courtyard where a large marquee had been erected surrounded by plants and lights, complete with a speech platform, lines of chairs and a big ceremonial oil lamp tower oojy-ma-bob. A sumptuous buffet had been laid on. I mentioned earlier that Sri Lankans are very laid back; this is especially the case when it comes to their time keeping. The Minister was due to arrive at 6:30: he didn’t turn up until 8:15. By that time we were bored and starving.

Traditionally the honoured guest must have a garland of flowers placed around his neck, usually by a young girl. Seeing that the only other female in our entire group was in her late 40’s, by default I qualified as the young girl. So I was asked if I would mind taking the responsibility. To say I was nervous would be a serious understatement. I was likely to trip over my own feet and accidentally punch him in the face, or get distracted by a passing butterfly, miss his head entirely and drop the whole thing at his feet. To add to the fun it transpired that the Minister was well over 6 feet tall, I was going to have to jump to get it over his head! Being a giant among Sri Lankans, I’m assuming he’d come across this issue before because just as I got to him, he kindly lowered his head, partially took the garland from me and lowered it onto his neck. At that moment the evening’s entertainment burst into action.

Kandyan dancers performed their dance while surrounding the minister as he made his way into the hostel grounds. Drums, metal ankle rattles and cymbals accompanied the bright outfits and large metal headdresses. The headdresses had a massive tassel attached to the top, which swung round at every slight movement of the dancer’s head. It was fascinating to watch. I couldn’t help but wonder how many practice sessions had ended with eye injuries and near garrotings. Their performance was stunning and over far too soon; then it was time for the endless speeches. I can’t say I paid much attention: I was really just waiting to devour the buffet.

Two weeks later and I’m loving the new hostel. Heaven compared to the other one. I have a double room with an en-suite all to myself, a great breakfast, full of fruit, is served every morning and –to my delight– there is a jam fruit tree outside my building that is visited by fruit bats every evening. I’m also (currently), the only guest, so I can beaver away at the fishing cat data in peace. But best of all are the nights, they are dark AND quiet!! With one notable exception: every now and then the common palm civets that live in the roof decide to throw a party just above my bed. Still, I’d rather have the occasional civet noise than the incessant interruptions and traffic din I had at the other place.