Anyone that’s met me knows how much I love food. There is very little I will not try, I’ve eaten bugs before now but I draw the line at testicles and eyeballs. Luckily, I seem to have quite a strong stomach which has –in the past– prevailed over some suspect food while others have been left glued to the loo. I do, however, have a slightly unusual reaction to spicy food that both my friends and family find hilarious – I hiccup. Don’t get me wrong, it’s not a cutesy little hiccup, it’s a beastly depths-of-your-body-rocking mouth explosion. It’s embarrassing; onlookers think I’m having some kind of fit. It takes ages to get rid of them and they hurt. I do usually get warning if it’s about to happen. I feel this strange sensation at the back of my throat and I have learnt that I should drink some water or take a few mouthfuls of something bland like rice or yoghurt. My problem is I really love food and don’t have a lot of self-control when it comes to food. I always think ‘Oh, just one more mouthful, I can get away with it’ then BAM!: Dying whale in the room.

Sri Lanka isn’t known for its mild curries, in fact, I think one person described it as ‘burn your taste-buds off’. Don’t misunderstand me, I don’t want mild food –it’s just easier not to have to reassure an entire restaurant, in bad phrasebook Sinhala and hand gestures, that all is OK. Plus, it takes 3 times as long to go through the palaver of alternating mouthfuls of food with copious drinks. Despite this, while over here, as with anywhere I go, I wanted to eat as much of the local food as possible.

surrounded by trees and plants. So I sat down and looked at the menu. Well, I recognised the word ‘curry’ but the rest was lost on me. Oh well, I thought, I’ll just order the most unpronounceable thing.  Just as the waiter approached I was bashed over the head by the sense monkey and thought to ask him which of the dishes were mild. After he’d stopped laughing he pointed to a mutton curry. Two delicious mouthfuls in and disaster almost struck, I could feel the excitable hiccup goblins ready to start bouncing on my diaphragm. I slowed right down, separated the small portion of my rice I hadn’t doused in mutton fire-sauce, and began the long ritual. It took me an hour to eat it! I escaped the implication that I was special by the skin of my teeth. It must have looked strange to the staff and onlookers, me eating so slowly. Luckily, I had bought my travel journal with me (thanks Hayley) so I may have appeared to have been busy just stopping to write in-between mouthfuls. I think I got away with it. 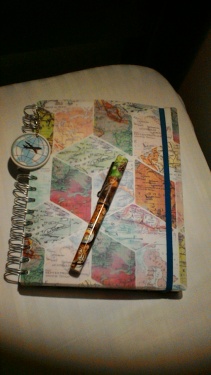